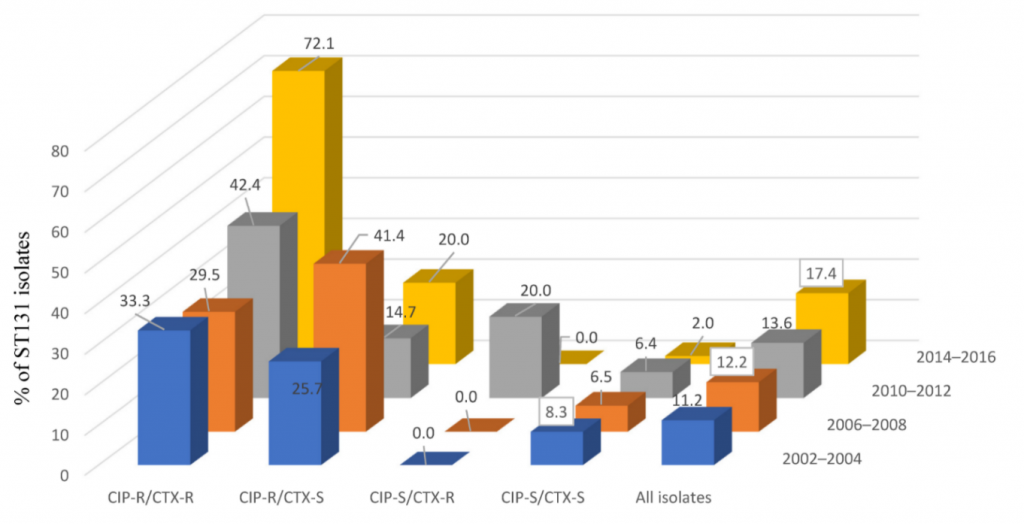 Sequence type (ST) 131 is a dominant multidrug-resistant lineage of extraintestinal pathogenic E. coli responsible for urinary tract infections (UTI) and bacteremia. Although there have been some longitudinal population-based studies on the role of ST131 clone in extended-spectrum β-lactamase (ESBL)-producing E. coli or fluoroquinolone-resistant E. coli in bacteremia, few longitudinal multicenter surveillance data on ST131 in community UTI is available. Dr. Tsai-Ling Yang Lauderdale from the National Institute of Infectious Diseases and Vaccinology and collaborators utilized isolates collected systemically from the Taiwan Surveillance of Antimicrobial Resistance (TSAR) program between 2002 and 2016 to better understand the role of ST131 in community UTI in Taiwan with results published in Microorganisms (2021 Apr 29;9(5):963).

The team selected 542 outpatient urine E. coli isolates from a pool of 2,997 to detect ST131 based on ciprofloxacin (CIP) and/or cefotaxime (CTX) resistance. Pulsed-field gel electrophoresis (PFGE) was performed on all ST131 isolates to further determine their relatedness. The estimated overall ST131 prevalence in the community UTI cohort increased from 11.2% (in 2002–2004), 12.2% (in 2006–2008), 13.6% (in 2010–2012), to 17.4% in 2014–2016 (p < 0.01). In the CIP-resistant/CTX-resistant group, ST131 increased from 33.3% in 2002–2004 to 72.1% in 2014–2016 (p < 0.01). In the CIP-resistant/CTX-susceptible group, ST131 was found in 24.3% overall without significant increase in its prevalence over time. PFGE showed emergence of a cluster of CIP-resistant/CTX-resistant ST131 carrying Gr. 1 CTX-M ESBL in 2014–2016, especially 2016. Multivariate analysis revealed that age (≥65 y.o) and CIP resistance were independent factors associated with ST131. This longitudinal surveillance showed that CIP-resistant/CTX-susceptible ST131 has been circulating in the community since 2002 but CIP-resistant/CIX-resistant ST131 increased rapidly in the later years. The surveillance also found being elderly and fluoroquinolone resistance were independent risk factors of ST131 infection. These findings indicate that continued monitoring of ST131 prevalence to detect emerging subclones with different antimicrobial resistance profiles and its association with community antibiotic consumption is necessary.