Higher frequency and amount of alcohol use are associated with an increased head and neck cancer risk, according to the results of a study conducted by the National Health Research Institutes’ National Institute of Cancer Research and by National Cheng Kung University Hospital. The results of this study were published in Cancer Epidemiology, Biomarkers, and Prevention.

The major carcinogen of alcohol is acetaldehyde generated through alcohol metabolism. Acetaldehyde associated with consumption of alcoholic beverages is listed by the International Agency for Research on Cancer as a Group 1 carcinogen, which means that there is sufficient evidence to indicate that it is carcinogenic to humans. Approximately half of the Taiwanese population are unable to metabolize acetaldehyde efficiently due to a variation in the ALDH2 gene. These individuals, after drinking alcohol, are likely to develop symptoms such as facial flushing and tachycardia. They are also more likely to develop alcohol-related cancers due to inefficient metabolism of acetaldehyde.

Studies have linked the association between alcohol and other cancers as well, including esophageal cancer, colorectal cancer, breast cancer, and liver cancer. With the increasing consumption of alcohol in Taiwan and the high percentage (~50%) of the Taiwanese population with compromised acetaldehyde metabolism, the incidence and mortality rates of alcohol-related cancers will likely increase. Therefore, reducing alcohol consumption in Taiwan in order to decrease the occurrence of alcohol-related cancers should be a public health concern. 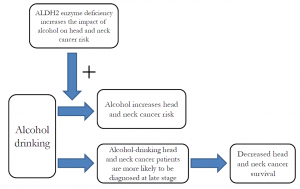